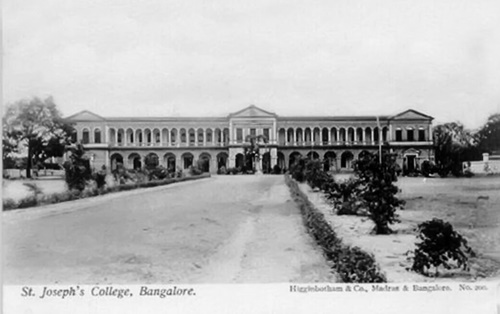 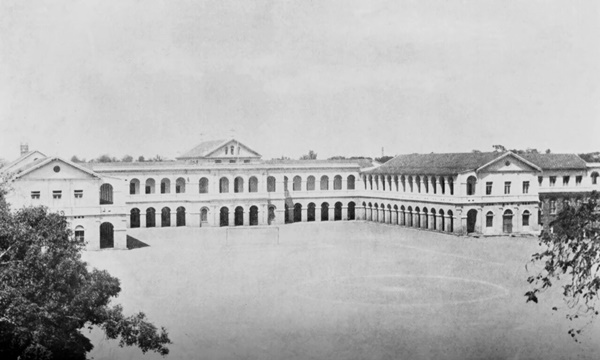 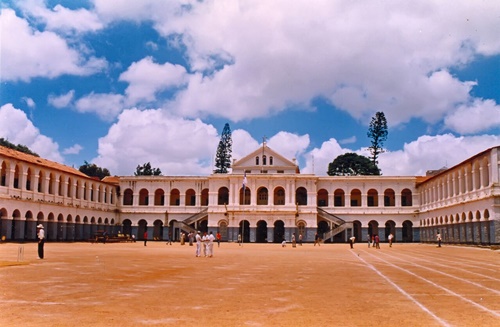 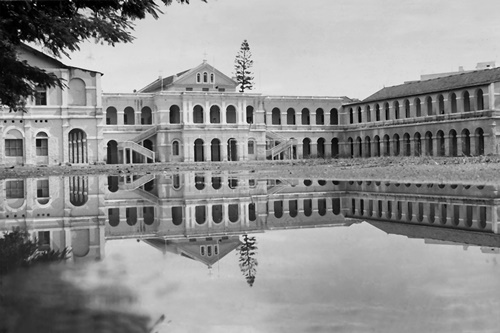 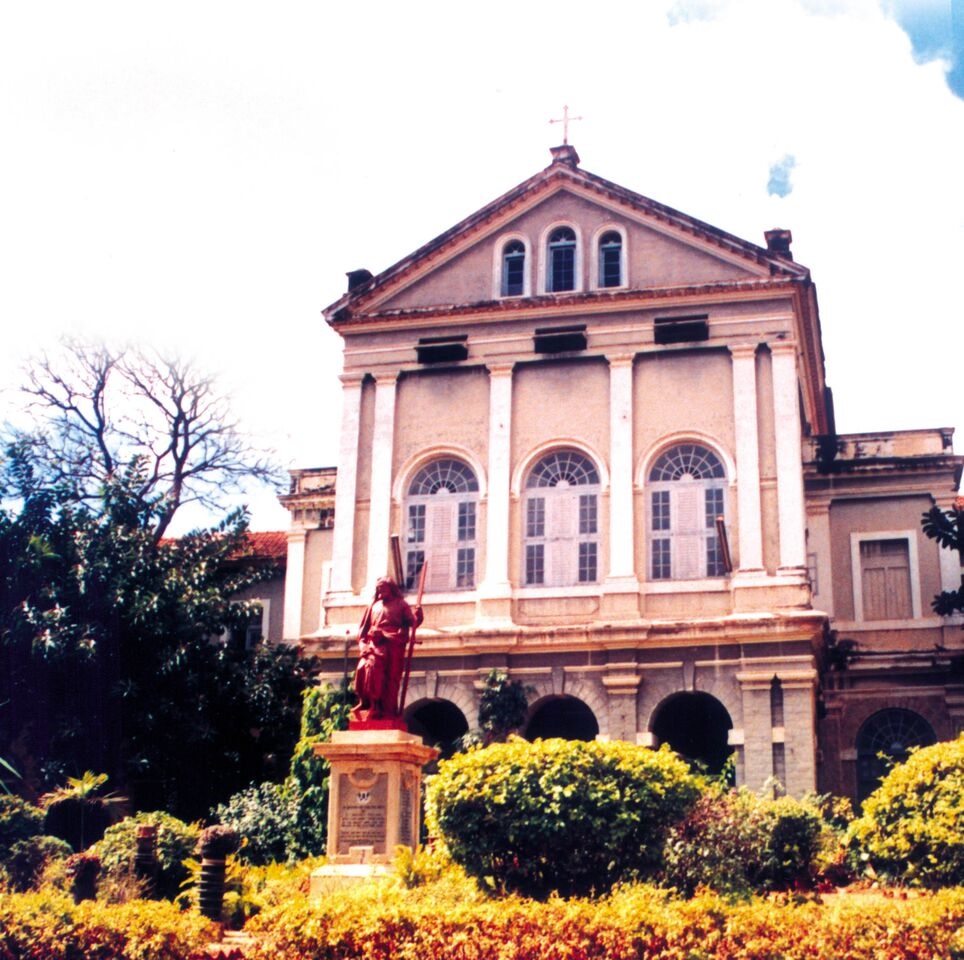 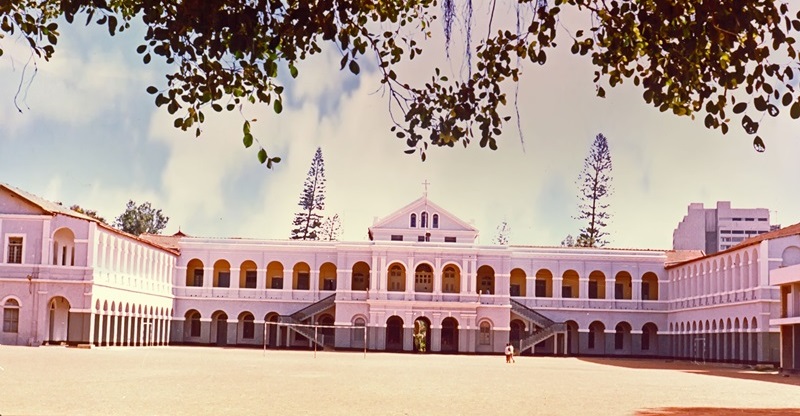 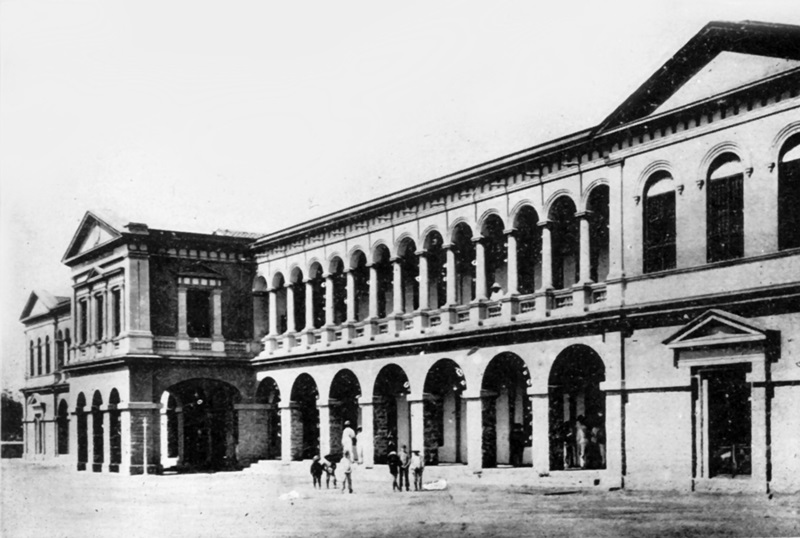 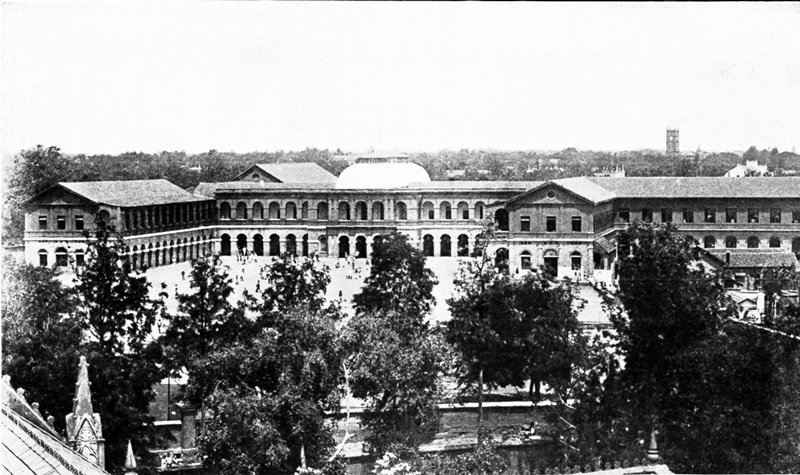 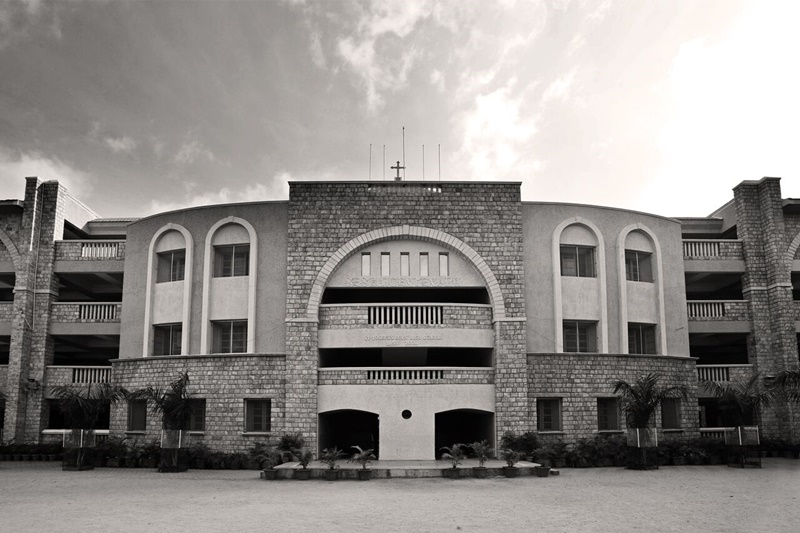 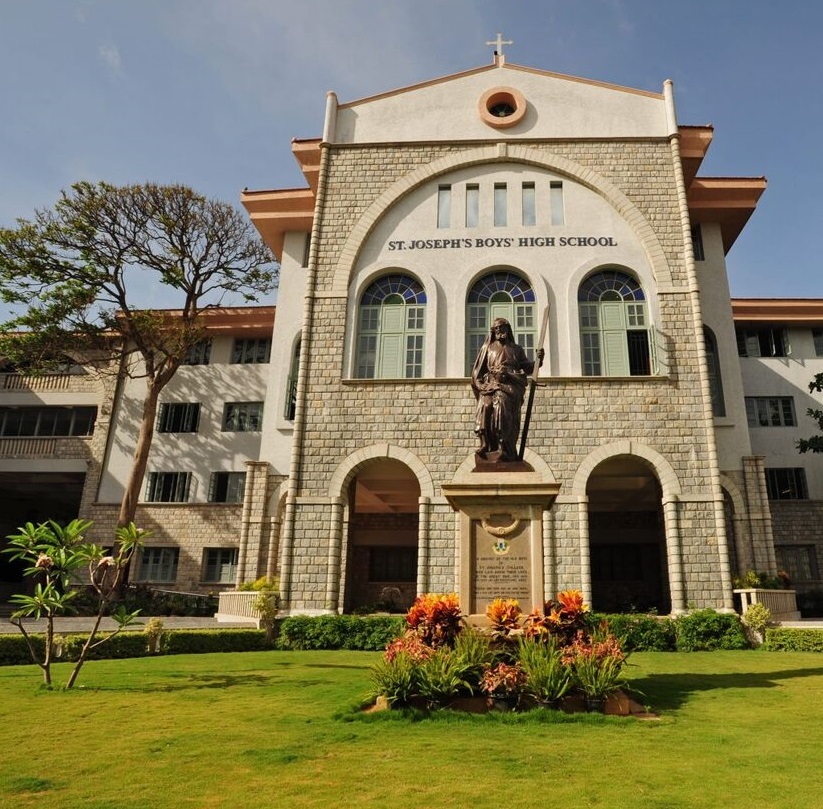 As early as 1841, Bishop Bonnaud planned to start a Catholic high school in Bangalore. This proposal took concrete shape only in 1854 when the priests of the Missions Etrangeres de Paris (MEP) bought a plot of land for a sum of Rs.1,000 at St. Johns Hill, Bangalore. Fr. Bouteloup had a house constructed in 1854 at a cost of Rs. 3,000 and this was named St. Joseph's Seminary. This house also contained an orphanage and a residential school.

The Madras University was established in 1858 and our boarders could be admitted to prepare for their matriculation examination. Fr. Charbonnaux who was in-charge of the school made this entry in his diary: "We decided to open a school for European boys. As knowledge of English in necessary to our Indian pupils and that of Canarese to European boys we determined to build a wing and a kitchen adjoining the Seminary." By May 1865 a new house was built to take in the orphans and boarders of the school

It was difficult for the three departments: seminary, orphanage and school to function in the same building. Hence in 1875, the orphanage was transferred to St. Patrick's Church and still exists as St. Patrick's Orphanage. The Seminary, for all practical purposes, closed down and hence the entire campus with all the buildings was utilized for the school and the boarding house. The school had a total of 144 students, 64 boarders and 80 day scholars.

The next important development was the change made by the very able new Rector, Fr. Maurice Vissac in 1882. He had the school affiliated to the Madras University as a second-grade college which could prepare and send students for the F.A. (First Arts) exams. In 1884, 2 candidates appeared for this exam and qualified successfully.

Fr. Vissac was in the tradition of nation builders. He wanted the school to be located in the heart of the Cantonment in a big campus. For this purpose he purchased a property called Rocklands next to the Madras Bank, the present State Bank of India, and next to the Good Shepherd Convent. He was the architect of the stately buildings on Museum Road whose foundation stone was laid in 1894. He also saw to it that two French priests from the diocese were sent to England to qualify themselves to teach in the school. He sent Fr. Froger and Fr. Schmitt who returned to Bangalore qualified with an M.A. from London University.

In 1898, the College, that is the school, transferred from St. John's Hill to the new buildings on Museum Road with a complement of 100 boarders and 89 day scholars. An attack of plague made parents remove their children from Bangalore in 1902 bringing down the strength of the school to 157.

To Fr. Vissac should go the honour of being the real founder of St. Joseph's College, After 20 years of tireless service he handed over the Rectorship to a worthy successor whom he had groomed - Fr. Froger. He was Rector from 1903 to 1913 and from 1915 to 1916. The beautiful oil paintings which adorned the walls of the refectories of the priests and the boarders were the products of the brush and easel of Fr. Froger.

The school was growing in strength from 100 boarders and 57 day scholars in 1903 to 239 boarders and 183 day scholars in 1913. To accommodate such a large number of boarders two new blocks were added to the original block and an immense playground called New Field was purchased in what in now Vittal Mallya Road next to Mallya Hospital. This was a tank bed and the land had to be drained to prepare extensive play fields for the students.

The St. Joseph's College in 1910 adopted the high school examination system giving up the old matriculation system. Perhaps this was the time when the school took the name St. Joseph's European High School. The University had also abolished the F.A. and replaced it with the Intermediate Arts Exam.

It was time for the Intermediate section to develop on its own. Moreover, the European section was expanding and all the classrooms were required by the school. In 1923 the Intermediate classes cut off from the school and were housed for the time being on the top floor of the newly constructed Indian High School. Fr. Argaut who was in-charge of the Intermediate section started work on constructing a spacious building for the University classes. He succeeded in upgrading the College in 1928 to a first grade college with the B.A. degree.

The heads of the institution are worthy of mention: Fr. Leo Vanpeene from 1916 to 1923 and Fr. J.B. Argaut. The school prepared boys for the Bangalore Middle and High School examinations and for what was commonly called the Junior and Senior Cambridge examinations.

The French Fathers (MEP) were finding it difficult to staff the school. The slaughter of the young men on the battlefield of Europe in the 1914-1918 war had practically destroyed a whole generation of men, some of whom would have become priests and joined the MEP. The Bishop of Mysore, Msgr. Despastures under whose jurisdiction came Bangalore at that time, decided to find a suitable religious order to which he could entrust these institutions, thus freeing his priests for pastoral ministry. His efforts to get the Canons of St. Maurice from Switzerland did not succeed as well as his efforts to get orders of teaching brothers.

He had earlier tried unsuccessfully to get the Jesuits, the Priests of the Society of Jesus founded by St. Ignatius Loyola - who were well known throughout the world as educationists - to take over these institutions. The Bishop now approached the General of the Jesuits in Rome with the same appeal. The General appointed a visitor to study the matter on the spot. The visitor Fr. Van Kalken was endowed by the General with almost plenipotentiary powers to take a decision. In February 1937, he wrote to the Superior of the Jesuit Mission in Mangalore, that Fr. General had approved that the Society of Jesus would accept the generous offer of the Bishop of Mysore. Further, if the Mangalore mission of the Jesuits could not provide sufficient Jesuits then the visitor would invite Jesuits from other Indian missions to offer their services for this work.

The first Rector under the new dispensation was Fr. A. Ambruzzi S.J. The first Principal of the school was Fr. L. Proserpio who later was appointed the Bishop of Calicut. Some priests of the old dispensation continued to work in the school to effect a smooth transition. Besides the Jesuits who came from Mangalore, Italians and Indians, there were Jesuits from various missions of different nationalities. Frs. Wigny and Fischer, Belgians from Calcutta Province, Fr. Scicluna a Maltese also from Calcutta, Fr. Lambert an Englishman from Madras Province, Fr. Starace from Ceylon and Fr. Benoit, a German from Poona Province.

The Italian Government with its leader Mussolini aligned itself with Hitler in the Axis against the British Allied troops in the Second World War from 1939 to 1945. Hence all the Italians and German Fathers became enemy aliens and were interned. The Jesuit superiors had to find Indians to man the school. Fr.E.J. Jacques an Anglo Indian with an M.A. degree from the University of London and Fr. Studerus a Swiss and hence a neutral, had to fill up the vacancies.

With the coming of Independence to our country, the European High School lost many of its privileges. During the British period the Anglo Indian school received grant-in-aid for teachers' salaries at a much higher rate than teachers in the SSLC school. These schools had their own examination system with a special Inspector of Schools to oversee. Moreover, they prepared students to appear for the Junior and Senior Cambridge examinations. The umbilical cord with England was shortly cut because our country was going through a severe shortage of foreign exchange and the University of Cambridge was continually raising the fee structure of the exam because of post-war inflation in England. The Government of India was unwilling to release foreign exchange for students to appear for these examinations. In its place the Anglo Indian Association under the leadership of Mr. Frank Anthony, its President who was an M.P., organized the Indian School Certificate Council which developed two examinations at the end of standards ten and twelve - the I.C.S.E. and the I.S.C. exams.

It may be an anomaly but the name St. Joseph's European High School was changed to St. Joseph's Boys' High School only in 1968. The name may have to be changed again since 2007, as girls are admitted to Std.11.

The old buildings have served their purpose and withstood the ravages of the time for almost a century, but they were no longer functional and some had developed cracks. The classrooms were too small having been constructed for class strength of maximum 25 whereas now the average strength is at least 50. The boarding house was closed because an ever expanding city required admissions for larger and larger number of students year by year. The larger areas occupied by just a few boarders with their requirements of dormitories, study halls, refectories, kitchens etc. could be better used to increase the strength of day scholars.

Every challenge brings up a person endowed with the courage, faith and ability to complete God's plan. Such a person was the Principal Fr. Michael John who trusting in God and convinced of the loyal support of the Old Boys and the parents, initiated plans to construct a completely new school building with a floor area of more than three times the old school building and all the facilities which children need for education today.

The motto of the school - Fide et Labore - urges every Josephite to scale new heights in learning, sports, service and give generously of himself in the service of others. Our inspiration is that simple man, St. Joseph of Nazareth, the foster father of Jesus, whom the Lord God led in faith utilizing his toil to bring to fulfillment the divine plan.